A place for everyone

The earliest parts of Holy Trinity Chuch date back to the early part of the 12th century during the reign of Henry I by Earl Roger of Clare, a close relative of the royal family. Soon after it came into the possession of the wealthy Augustinian abbey of Cirencester. The church benefited greatly from this and most of the present building was completed in the 13th century. It was greatly extended from the original Norman building. It is said that it was almost doubled in length, had trancepts added and a great central tower.

In the 14th century a fine eastward extension as built to form a lofty sanctuary.

Around 1530 a spire was added to the west tower. The church was much larger then that it is today and it was then that the church must have looked at its best.

With the dissolution of the monasteries, among them Cirencester, came a decline in the fortunes of Holy Trinity. In 1570 it was described as being 'like a dovecote', that is full of holes! Then in 1660 , the spire was struck by lightning and crashed down ruining the north aisle.

In 1673, as the vast building could no longer be maintained, the decision was made to demolish the north and south transepts to save the cost of rebuilding. Another blow came in 1750 when an earthquake struck and severe damage was done. This damage must have gone largely unrepaired as in 1819 it was reported that 'the church had fallen into such a state of dipapidation that not only unfitted it for the decent celebration of public worship bit likewise threatened it's entire destruction'.It's sole purpose was to house the towns primitive fire engine. Later in 1893 the church was described as a disgrace.

Just over a hundred years ago there was a tremendous rescue effort costing £1200 (around £1M today) was undertaken by the parish without any outside help. The building you see today is a fine tribute to their efforts.

Further large scale restoration was done in the 1960's and the 1980's. Much has been achieved in the past, but much still remains to be done if we are to pass on to future generations our unique heritage. 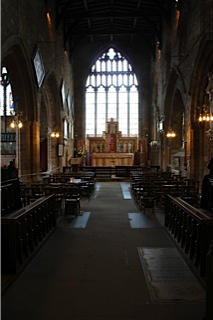